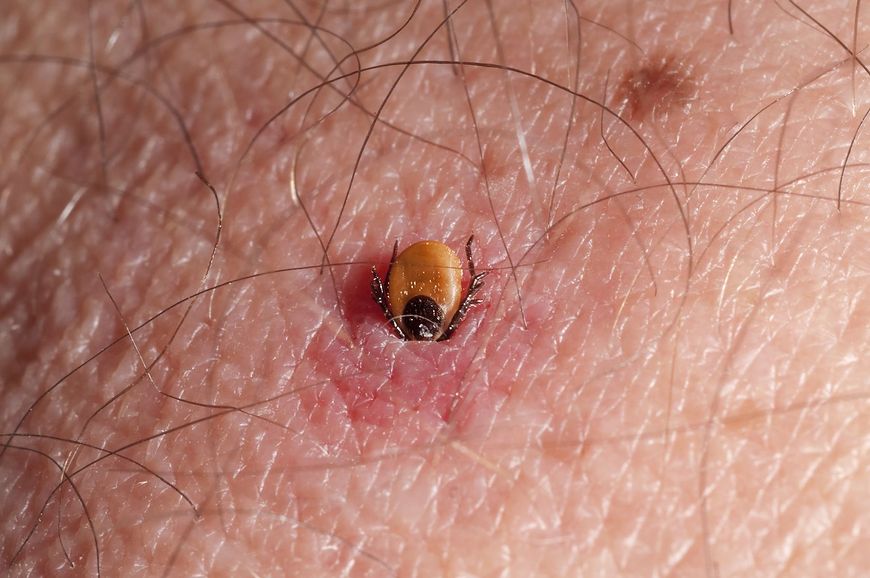 Is it really a tick, which will stick to our skin, can do "something" wrong? -of course, that such, though not everyone. There is also, unfortunately, the way of diagnosis, which tick is "clean", and which one is infected – which is really dangerous. And what a creation it is?

It is an arthropod of the order of mites and arachnid clusters. In our country, the so-called. dog tick (it is beautifully named in Latin: ixodes ricinus), lives mainly in moist deciduous forests (olchy, oaks, buki, hazel, birch trees) and mixed. The females are bigger, length approx. 4 mm (after being watered with blood, they may enlarge to 12 mm). The male is approx 2-2,5 mm. The female after drinking blood (human, cows, horse, the dog…) lays eggs and… dies. The fact that a tick got into our skin (head, neck, back, around the waist, legs) it is imperceptible, Also, puncturing the skin and drinking blood does not cause the slightest pain. He is often, that we don't know about the fact at all, that "we hosted” such a creature, which, after drinking blood, leaves us as quietly as it came. Then the symptoms of the disease (skin or worse – cerebral) it is very difficult to relate to the real cause. It is just as often, however, that we see a tick in a form… a black and bluish "lump" protruding from the skin, not removable with fingernails or fingernails! Sometimes it helps to actually coat it with oil ("chokes") – this makes it easy to remove, but in fact it is too late anyway, because the germs in it got into our blood immediately after the tick was inserted into the skin. So what kind of diseases such a toddler can treat us to?

• Borrelioza – it is caused by Borrelia Burgdorfer's spirochete, was detected in the city of Lyme (United States), w 1982 year.

• Tularemia – it is caused by Francisella tularense.

• Tick-borne encephalitis – they are caused by the so-called. arbowirus.

There are also other species of ticks. One of them occurs mainly east of Poland (taiga tick) and carries the so-called. spring-summer encephalitis, which has not yet reached us.

Another species – very dangerous -(Anderson's tick) only occurs in the US, in the Rocky Mountains, and with its own saliva, it can paralyze human muscles and kill them. It also carries malicious germs that attack the meninges and the brain.

As for "our" canine tick – I will skip the brucellosis problems, tularemii (diseases uncommon, well known to veterinarians, who catch them mainly from livestock or domestic animals) and meningitis, which are fortunately rare, but with a dangerous course and a serious prognosis.

Colleagues going to Masuria and the Suwałki Region should consult the Sanepid station, as to the expediency of vaccinating against viral meningitis. The areas where ticks are present are usually well known in "local" Sanepid stations. So take special care (described below) takes on significant importance.

On the other hand, a fairly common "after-tick" change” is Borrelia infection manifested by skin lesions. The most common of these is chronic erythema creeping rapidly from the place of tick insertion in a circular manner, evenly increasing the diameter from a dozen to twenty several centimeters. The most characteristic feature of this erythema is its vivid red border, slightly raised above the skin and a much paler "cake" pink-reddish inside it. The general condition of the patient is good, there are no major complaints, there is no fever. Extremely rarely in our latitude, borreliosis causes symptoms of irritation of the meninges and the brain starting approx. on the fourth-eighth day of skin lesions.

The second form of skin lesions is the nodular form formed at the tick injection site. The lump is glaucous red, quite soft, well demarcated from the surroundings, reaches the diameter 2-3 cm. It lasts for months if left untreated, and the surrounding lymph glands become enlarged.

The third form of cutaneous borreliosis is called. atrophic dermatitis of the extremities, more often the lower ones, with the occupation of large areas in the form of reddish, irregular stains. The changes are very persistent, lead to skin atrophy (tissue paper wrinkled).

The upper limbs are affected only up to the elbows. The diagnosis is confirmed by special serological reactions in the blood (the level of antibodies against Borrelia spirochetes). Treatment is based on the use of antibiotics: augmentin or amoxicillin, doxycycliny, davercinu or rulidu, or zinnat or cefataxime. A detailed decision must be made by a dermatologist. The form of creeping erythema is the fastest to be treated (10-14 days), others require treatment by 6 do 8 weeks.

How to avoid "intrusion" of a tick into our skin?

There is no one hundred percent method. Nevertheless, it is wise to avoid areas with a particularly high probability of 'catching' a tick:

a) do not set up a site under alder or hazel,

b) not "wade through" the leafy thicket,

c) do not stand under a deciduous tree during rain, etc..

This is because of the fact, that the tick does not fly, and therefore it must fall on us from above. It makes sense, of course, to wear the suit with the hood tucked quite tightly around the face and under the chin. Some people recommend various deterrents (especially fragrant) but I think, that their effectiveness is negligible. So we can rather count on a stroke of luck, especially in hot weather and warm nights, when we are dressed lightly. Our stalker will "track" us with his thermo-sensor, even from a long distance, or heights, and it can arrive unnoticed.

Final, quite an important question: whether to start treatment with one of the antibiotics right away if ticks are found in the skin? The "scholars" opinions are divided on this point. Most believe, that until the slightest, even the slightest peripheral-plaque reddening of the skin around the injection appears – we are waiting. As soon as it appears and enlarges, we start treatment according to the given set, e.g.. augmentin in quantity 3 x dz. po 1 table. (each 375 mg) by applying it at least by 10 days. Lubricating the skin lesion with any drug does not make sense. Antibiotic treatment will not prevent viral encephalitis, on the other hand, it may prevent borrelial meningeal complication.

Good luck in the summer weeks.