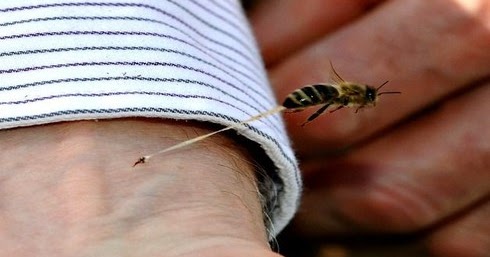 Pain – was stung by a wasp or a bee. Generally, each of us knows, how it reacts to the venom of these insects "injected" into the skin along with the sting. The intensity of such a reaction is on a scale from 0 do 10, if measured with the Beaufort scale. Means, that either there is no tangible reaction (even the slightest redness), or… it can be a real disaster (including the descent to death, and not only in the case of a sting in the area of ​​the larynx or epiglottis).

Deaths following bee stings have been reported for many years, especially by a greater number of them. Neither does this one know his reaction, who has never been stung or stung by a bee (stabbed) by the wasp. There are also exceptions in response to subsequent ones (e.g.. second in life) contact with venom.

The reaction need not be that slight, gentle, as trivial as the previous one. It can be much more violent and not only "local", and may even take the form of the so-called. anaphylactic shock, that could end in death, especially in the absence of immediate help. Anafilaksja (word of Greek origin) means the reaction of the so-called. antigen (jad) with the antibodies made in the body against it after the first contact during the first sting.

This first bite is the so-called. sensitizing dose, and the second or subsequent is the so-called. trigger or shock dose. Shock is massive changes in the entire circulatory system, consisting in turn in the rapidly progressive "paralysis of blood vessels, that is, their maximum extension, leakage of plasma beyond the vessels. This obviously leads to a drop in blood pressure, insufficient flow through the brain, heart, kidneys… Fortunately, these are indeed rare cases, only it is not known, who will they "hit". Usually the symptom of a sting is a strong burning sensation,pain, redness that develops around the sting within tens of seconds, and also a "bubble" of various sizes. These symptoms are the result of a reaction to "foreign protein", what the venom really is (toxin). Local toxemia (the presence of a toxin in the blood) violently energizes all our "defense forces" – Various substances are produced instantly, constituting the first line of defense: histamine, serotonin, acetylcholine and protein antibodies.

In the vast majority of cases, this is enough to limit the zone of action of the "attacker" and eliminate it after several hours.

So what should we do after a sting, however, to limit its effects – unpleasant locally and potentially dangerous in general?

1. Remove the stinger as soon as possible, whatever – fingers, discontinued, pin. It would be the best, so that no part of it remains in the skin.

2. Immediately “suck out” the site of the sting - if there is an accessible place, or ask another person to do it. It has the same meaning, like when bitten by a viper, i.e.. removes some of the venom, which does not work in the mouth and saliva.

3. Put "something cold" on the sting site, depending on the possibility at the scene of the incident (a cube of ice or frost from the refrigerator, cold tap or well water or, as a last resort, immerse in water, which we are fishing on). The cold significantly reduces the expansion of blood vessels, which hinders the penetration of the venom in the blood tissues and significantly reduces the violence of the whole phenomenon.

You can also use drugs with a clear effect. I would especially recommend them to those of us, who know about their strong "allergic" reactions in general, and for stings in particular. Various forms of adrenal cortex hormones are applied topically to the skin, i.e. the so-called. corticosteroids.

Using an aerosol brings relief the fastest, because it cools the surface of the skin, eliminating burning.

For people with extremely turbulent allergic predispositions, I would recommend with all my strength to acquire the skill of using a syringe! After all, it's incredibly easy - I mean, the opportunity to make yourself (or someone) intramuscular injection, which in special situations (alone away from people by the water)
may prove to be a self-rescue from a catastrophe!

Carrying it in your pocket 3-4 HYDROCORTIZON ampoules are not a problem.

If you react violently after a sting or for any other reason: red spots on the skin, numerous bubbles, itch, especially with the accompanying "splash", nausea, dizziness – Shell we, and we should even draw it into the syringe without hesitation (one needle) 2-4 ampoules of hydrocortisone and inject it intramuscularly (the second needle, after rubbing the skin with alcohol), even in the thigh or the arm.
It is the most effective drug to quench the whole "storm", which rages in us.

There are, of course, other preparations of this type, but I don't want to muddle the situation. This drug has another advantage: it won't do anything wrong with your body, if it wasn't even needed. It is widely available from prescription pharmacies, is produced in ampoules after 2 ml in doses po 100 mg (inject 2-4 amp.) or after 500 mg (inject 1 amp.). The full name of the drug is: Hydrocortisonum hemisuccinatum.
The described procedure applies entirely to a bumblebee bite, the so-called. ślepaka, or gza, also called "horse fly" or "gray fly".
At the end – on the subject of "treating" various diseases with bee venom, especially arthritis and rheumatism (the so-called. apitherapy) – it does not have any fundamental influence on the complex nature of these conditions!
And if some people are "helped", either based on the suggestibility of the treatments, that is mentally, or… ill with delusions.